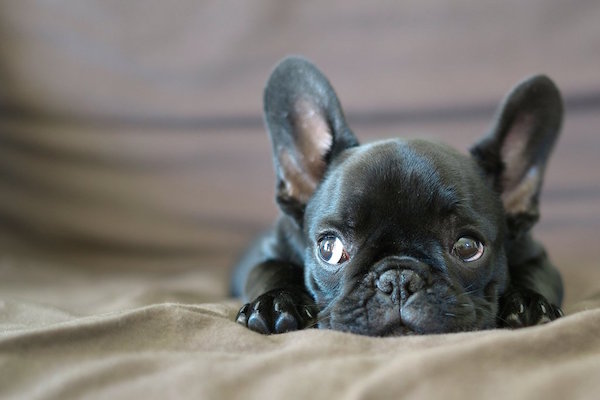 The French bulldog has jumped into the American Kennel’s top ten favorites list in America and tops the British list for favorite breeds. Common Frenchies traits include stubbornness and gold medalists in farts. They are also sweet, loyal companions who usually have one alpha in a family. While many people want a Frenchie and have seen various celebrities (Lady Gaga, Hugh Jackman, The Rock and more) flocking to the breed, there are a lot of misconceptions about the breed. Any potential Frenchie parent should do their research.

All Frenchies Are Friendly:

This is actually not true. A lot of humans assume this about dogs in general, without checking with the human companion. Being a litigious society, if you approach a dog and it bites you, many people try to have the dog put to sleep. Humans should not punish dogs for their own lack of self-control. Always use caution and make eye contact with a dog’s alpha, their human. Even then, listen to what the human says—if their dog doesn’t like some category and you or your company fall into, respect it.

Please note, this goes the same for their humans. Mostly I find people with Frenchies have a good sense of humor, but there are those who are rigid and do not want to be approached. A single person eating a meal does not want to be joined because they are sitting with their French bulldog. They might also bark loudly at you for sticking a camera in front of their Frenchies’ face without asking.

Frenchies are a cross mix of English Bulldogs & Pugs

While this is true for the most part, some of the small bulldogs were crossed with terriers. In this instance, the Frenchie will have a longer snout, which helps to overcome some of their breathing issues.

Due to their small bodies, 80% of Frenchies are artificially inseminated. This in turn, does add to the cost of Frenchies from breeders as most of the dogs have to have a C-section. While the average litter is 2-3 puppies, the record number was 13, some of whom we have met during the London Frenchie Meetup at Regents Park.

This goes on a case by case basis, however, Frenchies carry 85% of their weight in their shoulders, making them top-heavy. While Frenchies like @cheriethesurfdog are comfortable in the water, please do not try letting your Frenchie near a body of water without a life jacket if their swimming skills have not be proven. Frenchies are known to sink like a stone, thus a dog life jacket doesn’t sound so ridiculous to their humans, but necessary.

There is a joke saying Frenchies don’t make good guard dogs because they think everyone is there to stroke them.

If you haven’t seen this, Jules the Frenchie wants you to watch this video of her defending her home from…bears.

Clown dogs are often wise, they do judge you and they are sensitive so be kind to them and they will love you back immeasureably.

5 Best Fruits That Your French Bulldog Needs To Eat

How Much Is A French Bulldog?

Select the fields to be shown. Others will be hidden. Drag and drop to rearrange the order.
Click outside to hide the compare bar
Compare
Compare ×
Let's Compare! Continue shopping

Don’t Want To Miss Anything?

Be the first to see new arrivals, exclusive ideals and much more

Please enter your username or email address. You will receive a link to create a new password via email. Remember now? Back to login